First off I just wanted to say congratulations on being here and reading this review of Instant Email Empire. Too many people just jump into things online without checking them out first, then complain when they get scammed.

But you’re one of the smarter ones. You do your research first. 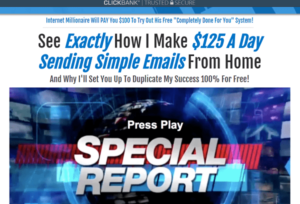 Just to be clear at the very start of this review; I have no affiliation with Instant Email Empire, so you’ll receive my unbiased opinion.

I also wanted to note that I created this website to help others find legitimate ways to make money online. I earn a fulltime income from the internet, which allows me to live the laptop lifestyle. It’s my aim to help others do the same.

It doesn’t matter whether you just want to make some extra income on the side, do an online business, or look for ways to get wealthy, anything’s possible online, and we can make money at any time of the day or night with access to a global market.

It’s because so many people venture into cyberspace looking for new opportunities that there are also so many online scams and products that waste your time and money. These parasites invent so-called systems that are too good to be true, but unfortunately people do fall for them quite regularly.

The whole reason I research and write reviews on make money schemes and training programs is because reviews are the best way to sort the good stuff from the stuff that totally sucks. It’s about doing your due diligence before getting involved in something.

I heard a lot of online chatter recently about this Instant Email Empire make money scheme, so I just had to dig into it and write a review.

Let’s now see if Instant Email Empire is the real deal or not.

What Is Instant Email Empire About?

Instant Email Empire is presented to us by a guy named Bobby. I don’t know his last name and who even knows if “Bobby” is his real first name. If you buy into his scheme he says he’ll give you his email system that generates around $125 per day with virtually no work required.

Doesn’t sound like mega bucks, buy $125 a day, 7 days a week is handy cash if you hardly have to work for it.

All you need to do is duplicate the process Bobby uses and send out some simple emails each day.

When you arrive on the Instant Email Empire website and start watching the sales video, the first thing you’ll view is some news report, which is a compilation of generic reports about making money from home and work from home jobs.

This news report has nothing to do with Instant Email Empire directly, and I’ve actually seen this same report a number of times in sales pitch videos for other make money schemes.

This has been tossed into the mix to make the scheme sound more credible, I believe.

This Bobby dude also contradicts himself. While he tells us we can make $125 a day just like he does, in virtually the same breath he tells us that he’s become a millionaire from his system.

Maybe my math sucks, but I’d say it would take quite a long time to become a millionaire when making $125 a day.

And if he really was rolling in the dollars from email marketing, why bother telling us about it, trying to sell us his scheme? Why doesn’t he just go off and enjoy the spoils he says he already has?

Anyway, maybe Bobby is just a nice guy who willingly wants to share his secrets to success with us all, though I doubt that.

I make more than a fulltime passive income online and so can you. If you want to learn how I do it, just click here for details.

Most of the video is nothing more than typical sales hype, where we are constantly bombarded with how much money we are going to make, but are never really told much about Instant Email Empire and how it actually works.

Yeah, it’s awesome that we’ll be cashing in and all, but how do we do it?

Anyway, I discovered some details after digging deeper.

Instant Email Empire is a common kind of scheme where all we are required to do basically, is clone someone else’s established system.

Bobby says that he’ll start you off completely free, which sounds awesome, and will even give you an email subscriber list of 5000 contacts the moment you create your free account.

Now the funny thing is, as soon as you go to complete this step, suddenly you are greeted with a pay wall asking you to pay up $34.

I thought you just said this was free, Bobby?

The thing is though, even if you do have to pay $34, 5000 subscribers for that price is cheap. Bobby’s program is obviously all about email marketing, so you’ll need subscribers for it to work. The problem I’m concerned about is whether Bobby is selling the same 5000 subscribers to every single person who joins his scheme?

If that’s the case, then every member of Instant Email Empire will be sending the same 5000 people the same emails with the same offers.

Bobby says he gives you the emails to send out and what products to promote, so it stands to reason everybody will be sending out the same emails to the same group of people. 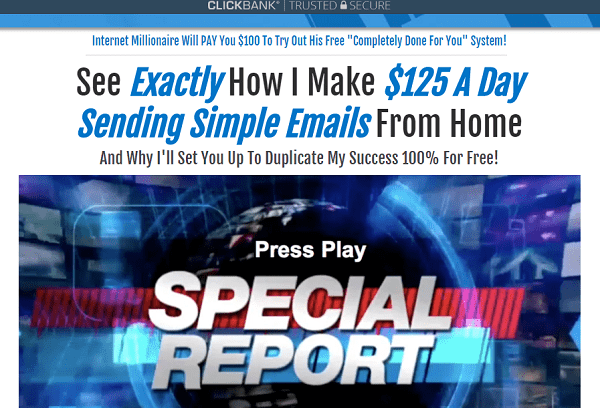 Those two email marketing schemes have since disappeared, but soon after Instant Email Empire was born.

The fine print on the website even points to yet another platform called “Daily Cash Siphon”, so there seems to be a whole array of these schemes under different names.

That’s never, ever a good sign that something’s legit. It’s usually a sure fire signal that the program is a nasty scam.

The sales pitch is identical for each of these schemes, and it’s the exact same sales pitch used in Instant Email Empire.

Basically all this scheme involves is buying subscribers and tools from Bobby, then using those to promote Instant Email Empire to others so you can earn commissions when new people join.

Ordinarily I wouldn’t have a huge problem with that, but the issue is that the way this scheme is set up (and has been set up in the past), it just simply doesn’t work because of the subscribers you are getting.

You’re even given a duplicate website, which won’t rank in search engines and get you any free traffic that way.

It’s not impossible that you could make money, because you are actually becoming an affiliate of an email marketing company called Builderall as part of the process, but the likelihood of anyone making much the way this stands is very low.

“Bobby” Is NOT a Real Person

It’s even stated in the website’s fine print that Bobby isn’t a real person.

The guy you see in the sales video has been featured in many sales videos for various make money online products and get rich quick schemes.

He’s not dodgy. He’s just a video freelancer who works off the freelancer website, Fiverr. He sells his services and people like the owner behind Instant Email Empire hires him, gives him a script to work off and is asked to make a sales video.

This practice is super common these days, and is either used by people who don’t have the time and skills to produce their own video, or people who want to remain anonymous (the latter of which is generally a red flag). 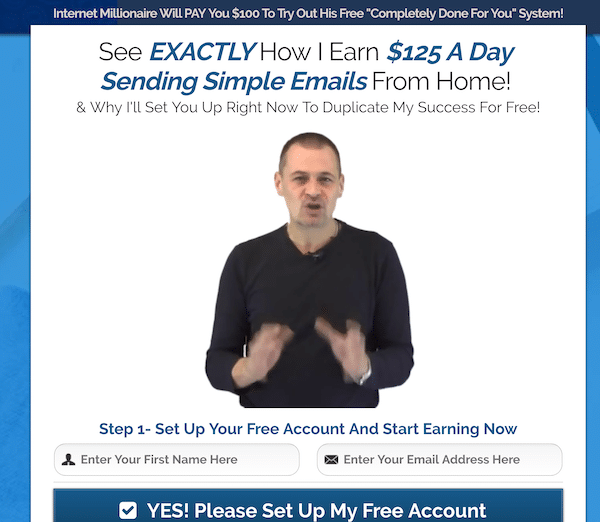 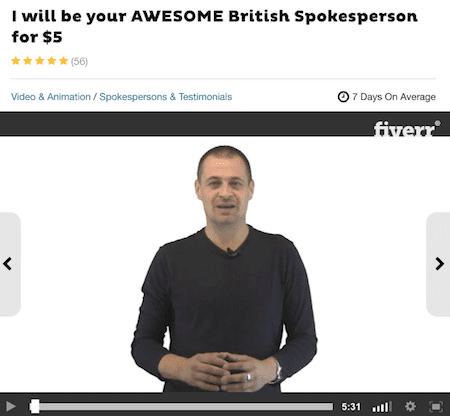 It seems to me that this scheme would be targeting newbies. I say this because I doubt whether any experienced online marketers would see any value in what’s on offer here. They would know that this system, as is, would not be effective.

Also, the sales pitch is sketchy and rather misleading, and even making a modest $125 a day with this would be damn hard to near impossible.

How Much Does Instant Email Empire Cost To Join?

Bobby claims this scheme is totally free in his sales pitch, but it’s not free at all.

First you have to pay him $34 for his duplicate subscriber list of 5000 people, then you have to join Builderall, which is the platform you’ll be sending your duplicated emails from. That costs $29 a month.

Along with that there are sure to be other upsells you’ll get bombarded with. Who knows what this could end up costing?

Is Instant Email Empire a Scam Or Legit?

I don’t know if I’d label this an outright scam. On the dodgy and rather useless side yes, but you do “technically” get something for your money; such as the 5000 subscribers and a duplicate website.

Overall this scheme is pretty useless as is and I really can’t see anyone (except fictional Bobby) making any money out of it.

Email marketing is real and effective enough if done the right way, but this scheme is done all the wrong way.

The only real positive I can see in this is that Builderall is a legit company with a legit affiliate program, so you could potentially make money by promoting them.

Other than that, most of the rest of IEE is either falsified or just plain old ineffective in my experience.

I wouldn’t call this a scam, but I would say it’s a waste of time and don’t recommend it.

Do What I Do To Make Passive Income Online!

While you can make money with email marketing, the way IEE is set up, it’s really not very likely.

Instead of that, I suggest you give affiliate marketing a try, and you can always add email marketing (done right) into the mix down the track.

I make more than a fulltime monthly income online, and most of my money comes from affiliate marketing. I don’t even have to work at it fulltime either.

If you are shown the right way to do it through some good training, then anybody can make money as an affiliate, and you don’t even need any money to get started. Just a computer and an internet connection and you’re good to go.

Multiple streams of passive income will end up being the result after a while, which will give you lifestyle freedom if you end up doing it fulltime like me, or even an awesome part-time income as a side hustle.

To help my readers learn more about it and discover how to get started, I’ve written a complimentary make money online guide. Just hit the banner below to check it out.

« Is Day Trading Academy a Scam or Forex Trading Made Easy? » Is OMG Sweeps a Scam? Will You Really Win $50K?