Is Responsive Media a scam online job source or a legit business? That’s a question that’s been asked many times, and one I answer in my Responsive Media review. We’ll discover what this platform’s really all about and whether it delivers on its promises of lucrative online jobs.

It’s really great that you’re here and reading my review. It proves to me that you’re one of the smarter people online, and you’ll do your research on something before joining up. That’ll save you from wasting your valuable time or risking getting involved in a scam. 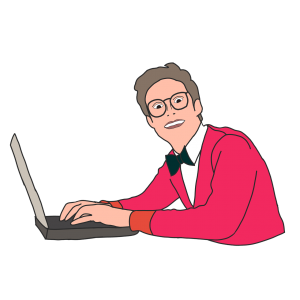 Whether you’re looking for an online job, something to make some spare cash in your downtime, or even want to launch an online business, the internet has really thrown open the doors of opportunity when it comes to making money from home.

I’ve been making a fulltime income online and living the laptop lifestyle for quite a few years now and it’s my goal to help others do the same, or at least find extra ways to make money from home.

One thing I really do love about the internet is the ability to make passive income while you sleep, because it’s global and people are online, somewhere in the world, 24/7.

While the internet has created numerous new options for making money that didn’t exist before, the virtual doors of the online world are also open to all the scammers. They come online, create dodgy schemes that promise the world, take our money and run off with it.

It’s something we always have to be careful of.

The best way to learn what’s legit and worth it and what’s a scam you should totally avoid is to read product reviews just like you are right now. It’s why I research and write reviews on so many make money online (MMO) schemes and so on. I’m here to help.

Recently Responsive Media came to my attention with their advertised, lucrative job offers. It got me really interested, so I did some research on it and wrote a review.

Let’s now see if Responsive Media lives up to its promises or not.

Avoid the online scams. Click below for something that makes REAL money…

What Is Responsive Media About?

Somehow the company has managed to hang around for quite a long time now, and as you read through this review, you’ll understand why I just used the word “somehow” in relation to this company.

They advertise jobs for all sorts of things, and the pay rates they claim these “easy” jobs pay that you don’t need any “experience” for, are always really high, way higher than what you would normally expect to get paid for doing things like simple data entry from home and so forth.

You can check out some examples of jobs and pay rates they advertise in the images below, but common job listing are: 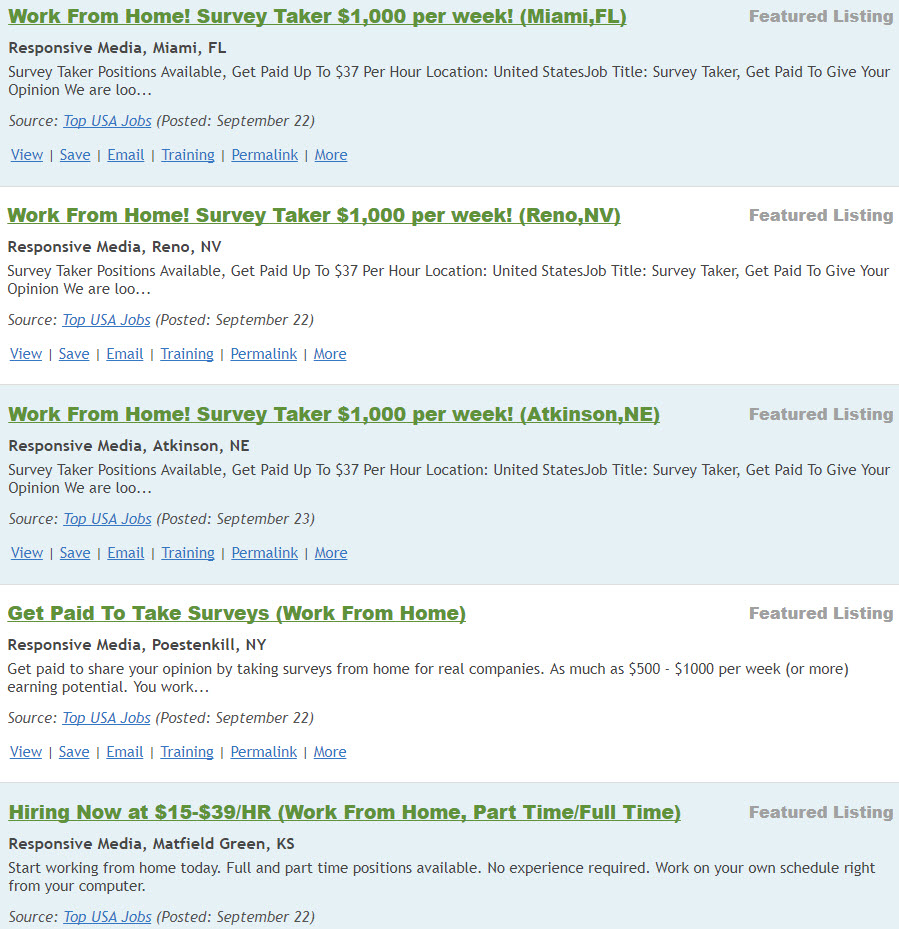 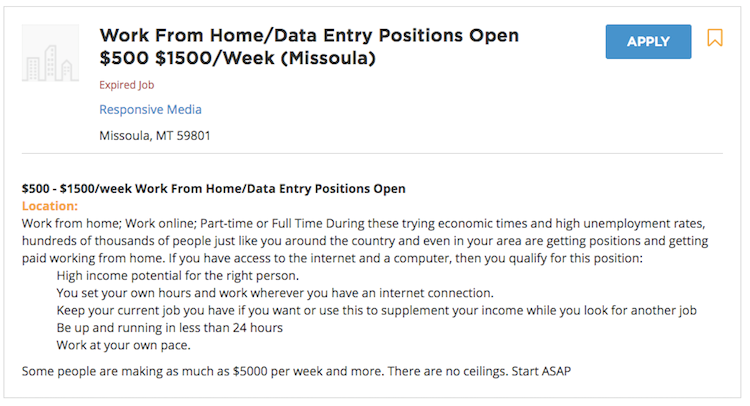 The funny thing is, in one of the images above they’re promoting doing paid surveys as a job, and then claim you can make $1000 a week. I’m not sure what survey platforms these are, but doing paid surveys isn’t really a job, and they don’t pay that well. In fact, you’d be lucky to make $1000 a year from surveys, let alone per week. I’ve done plenty of them in the past on various platforms, so I know first hand.

Some of their jobs even claim you’ll be making $5000 do some simple tasks that you don’t even need any prior experience to get hired.

None of this sounds very believable so far, does it?

Most of the time the ads will be displayed on low quality job boards and they’ll have titles like the following:

Many tasks (apart from the surveys) like they promote in their jobs are often simple tasks that are outsourced to freelancers in low income countries, because they can get the work done more cheaply.

No way is anyone going to be paying $1000-$5000 a week for things like data entry when they can outsource the tasks for next to nothing.

All of this sets my alarm bells ringing so far.

If you really want to make some money online with no scams, then do what I do. I’m making a fulltime passive income from home online. Click here to learn how.

How Does Responsive Media Really Work?

Things start to get weird when you try to access the advertised jobs or find out more information. Sometimes you’re simply asked to input your name and email, while other times you’ll find yourself being redirected to other websites that often don’t seem related to the advertised job at all.

You’ll find yourself being bait and switched to some membership site, or a high ticket platform like MOBE or Aspire, where they ask big money for memberships.

Then there are jobs where they actually want YOU TO PAY before you can even apply for the job.

That’s unheard of in the real job market. Jobseekers don’t have to pay to apply for genuine jobs or employment, whether they’re online gigs or offline work.

Apparently, from my research, often it’s the data entry positions where they ask for a registration fee before you can apply for work.

So basically they are trying to attract people looking for paid jobs that can be done from home, but instead of getting a job that pays regularly, people are asked to pay them. And then many of the other gigs are simply referrals to paid survey platforms where you earn peanuts.

And then there’s the high ticket schemes with the high pressure sales tactics that promise big commissions if you spend thousands of dollars first.

It definitely seems like Responsive Media is just a load of BS with no real paying jobs listed at all. It all seems to be about using bait and switch tactics to get people to join other schemes, or suck money out of them for a well paying job that simply doesn’t exist. 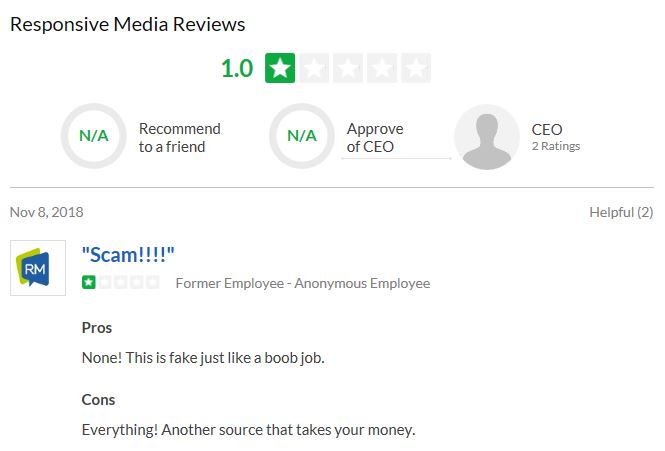 Nobody really seems to know the answer to this, and it’s one of the most asked questions about this dubious company. The owner has done their best to remain anonymous, which is always a major red flag.

The owner of a legit jobs site would have no reason to try and hide their identity. More often than not, if someone won’t reveal who they are, they’re usually running some sort of scam, or at the very least something that really doesn’t deliver results.

One name that’s been floated around is “Lee Wang”. Then I came across another name that appears to be loosely associated with Responsive Media, a lady named “Betty Abion”.

Still, there’s no real confirmation that either of these 2 people own or run Responsive Media. 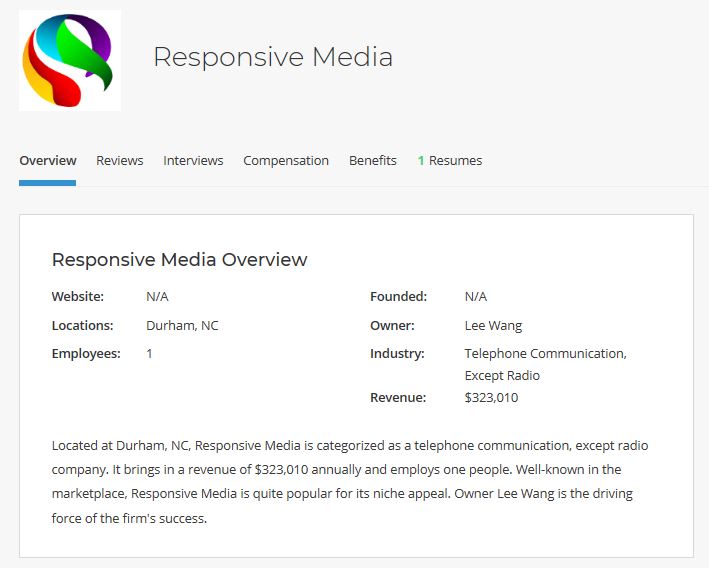 So What’s Really Going On With Responsive Media?

Well, there are no paid jobs available through Responsive Media’s ads, that’s for sure.

To me it looks like an affiliate is running this site, and that’s why there are lots of “job” ads for things like paid surveys. Survey platforms often have referral programs where you earn money on every new member you send their way.

It’s the same for the high ticket schemes like MOBE, Aspire and others. Affiliates of these schemes can make big dollars when they get new members to join.

Basically Responsive Media seems to be all about false advertising, and then employing bait and switch methods to try and get people to join other things.

Some of the so called jobs on Responsive Media are simply designed to harvest email addresses and build an email list to market to.

There’s nothing wrong with being an affiliate and trying to earn commissions, so long as it’s done openly and honestly. This scammer is listing fake jobs ads to try and achieve their objectives, which is wrong on so many levels.

The market Responsive Media is targeting is actually jobseekers, or people needing some extra paid work on a regular basis that they can do in their own time online.

Unfortunately, these posted jobs are all completely bogus. Whoever is behind this site is preying on people who really need work, but instead of finding paid work, the would be workers are asked to pay to apply in many instances.

How Much Does Responsive Media Cost To Join?

You don’t actually join Responsive Media, so there’s nothing to pay there directly, but many of the advertised positions ask you to pay a registration fee, or application fee to apply.

Then there are other schemes they switch you over to which can end up costing tens of thousands of dollars if you get really involved.

Is Responsive Media a Scam Or Legit?

I’m more than happy to call this one out as a scam, because everything about it is fake and misleading. All the advertised jobs are totally fake, and constant bait and switch is being used to funnel jobseekers into all manner of other schemes.

The person behind this website is likely an affiliate of a whole host of other schemes and is deceitfully and underhandedly trying to get people to join these schemes by first promising some easy, yet lucrative job.

Like I said before, people like this give the affiliate marketing industry a bad name, which is unfair, as there are many honest and ethical marketers out there.

Following up just about any job offer from Responsive Media is likely just going to end up costing you money rather than making you money.

If you see one of their job ads anywhere online…RUN!

Make Legit Passive Income Online Just Like I Do!

The idea of these easy jobs advertised by Responsive Media sound good in theory, but unfortunately they’re all bogus.

Now, I can’t offer you a paying online job, but I can introduce you to how I’m making more than a fulltime living online without having to put in fulltime hours.

In fact, there’s not even any financial risk, as all you really need to get started is a computer and access to the internet.

What I do even makes for the perfect side hustle. No one has to do it fulltime. I like it being my main money earner though, because it gives me enormous lifestyle freedom, and that’s important to me.

As I mentioned earlier, affiliate marketing is what I do, but done the right way. I believe anybody can make a go of this and do well if you follow some good training. That’s the key.

A lot of my income is now passive and I’ve managed to build up multiple sources of income too. Having both time and money at the same time is what leads to more freedom and fun.

I’ve written a complimentary make money online guide to help my readers learn more and get started. All you have to do is click the banner below to have a quick read of it. It’s worth a look.

« Is Traverus Global a Scam? Paycation Travel MLM Reboot » Is EZ Money Team a Scam or $1 Million In 12 Months?