My Survey Jobs Review – Can You Really Earn $500 For a Survey?

In this My Survey Jobs review we’ll look at whether My Survey Jobs is legit or a scam. People were asking questions about it and talking about, so I wanted to look into it and see what the deal is. The site claims you can make as much as $500 a survey, but is that for real?

Read on to discover the truth about My Survey Jobs…

The internet has really opened the doors to so many money making opportunities that you can do from the comfort of home. You just need to be able to avoid the dodgy stuff in the process of searching for the stuff that works and is worthwhile.

While there are heaps of paid survey platforms online, this is the first time I’ve seen one being promoted as paying up to $500 to complete a survey before, so I decided to take a look at My Survey Jobs and write a review on it.

On my website I tend to write a lot of product reviews on make money online (MMO) schemes, as well as platform that claim to train people in making money. This helps me discover what’s worth it and what’s not and relay that information to my readers.

When it comes to make money products, some are really good, some are okay, while others are either a waste of time or complete rip off scams.

It’s important to be aware of this, and that’s why it’s so good that you’re here reading this review. You do your research before joining something and are far less likely to ever fall victim to a scam.

Let’s now see if My Survey Jobs is worth it or not.

Surveys don't pay much. Click below to earn some real cash!

What Is My Survey Jobs?

Like I mentioned at the very start of this review, My Survey Jobs claims people can earn up to $500 for completing a single survey.

That’s unheard of in the world of paid surveys.

I’ve been a member of, and have reviewed, numerous paid survey sites, and most of those would average paying maybe a couple of dollars per survey at most, give or take. Saying that you can earn $500 really rings those alarm bells for me.

Another rather ridiculous claim this website makes is that new members will make $100 within the first 2 hours of joining.

I can’t see how this is even remotely possible by doing paid surveys.

I mean, the idea of companies having surveys done is to collect valuable data, but none of these companies pay out big cash for that. It would cost them an absolute fortune otherwise.

There’s just something not right with all of this.

All I can say is that if you have been considering signing up and joining My Survey Jobs, hold off on that decision until you’ve finished reading this review at least.

I found this part of the website pretty funny. I’ve seen these types of calculators on various make money online scam websites, but it’s the first time I’ve seen one on a survey platform.

The idea is to input some information into the calculator and you can work out how much money you’ll roughly be earning weekly, monthly and yearly.

It has a major flaw though. One of the fields asks you to input how much you’ll be receiving per survey.

I mean, how would you know? Survey payments vary from survey to survey.

The calculator ranges from $1 up to $75 per survey for this field, but doesn’t include an option for $500 like the initial sales pitch says you can earn.

Surveys just don’t pay much no matter what. If you are looking to make some real money online, then have you considered giving affiliate marketing a try?

It’s quite easy to get started and earning when you follow the Wealthy Affiliate training that I did. You can even join for FREE! 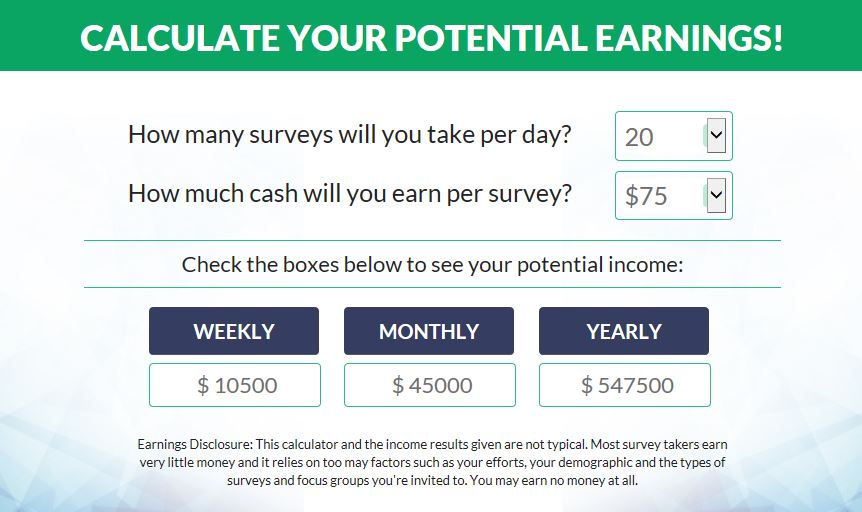 How My Survey Jobs Really Works

The first thing to do is join up and fill out the required information. Once that’s done you get to watch a sales video, where the presenter claims you’ll be making that $100 within the first few hours.

The funny thing here is, I recognised the woman in the video straight away. She’s a professional videographer/actor who sells her services on the freelance site, Fiverr. I’ve seen her appear in loads of sales videos for make money products and so on.

Anyway, once you get past the sales pitch you’ll soon discover that My Survey Jobs doesn’t actually provide its members with any surveys to complete whatsoever. That’s right, zero surveys.

You see, this isn’t a survey platform that acts as a way for survey takers to be matched up with surveys from various businesses and companies. Instead, what this platform does is go on to recommend you join some other third party websites which offer surveys. 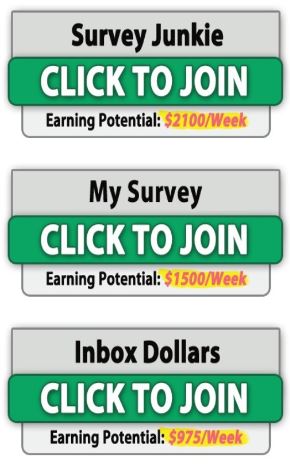 While these 3 sites are definitely legitimate, even if you join them, there won’t be any surveys that’ll net you a cool $500. In fact, you’d be lucky to get paid $5 for completing one survey on any of the 3 platforms above.

The sign up process doesn’t end with the 3 survey platforms. You are then directed to create an account with another rewards type platform called Inbox Dollars. My Survey Jobs tells a few lies about Inbox Dollars.

For starters, they say people can only join twice a year when the platform opens its doors to new members.

They’ll also tell you that you’ve been especially selected to work for Inbox Dollars.

Anyone can join Inbox Dollars at any time, and you don’t actually work for Inbox Dollars. It’s not a job or paid employment. It’s a rewards site.

Now that you’ve done all this you can go on over to the member’s area of the website, where you’ll get to watch another video. In this video you’ll be told just how vital it is that you follow and complete every single step that they say, otherwise you won’t be able to make all this BIG survey money they promise.

Now you are told you have to sign up for a further 10 survey platforms.

That now makes a total of 13 survey sites plus the Inbox Dollars site.

Here we are told we’ll be pulling in thousands of dollars every week from participating in all these paid surveys.

Even if you could do constant surveys on legit platforms, surveys just don’t pay enough money to earn you $1000s per week.

Whoever is behind the My Survey Jobs website is an affiliate of all the survey platforms they send you too. In other words, for every member they refer to these other sites, the owner of My Survey Jobs earns a small commission.

All these other survey sites, along with Inbox Dollars, have referrals programs, where members can earn money and rewards by referring other members. It’s not usually very much money, but have enough sites on the go and get enough people to join, and it can start to add up to a tidy sum.

This is aimed at anyone looking to make a little extra cash online in their spare time, except they make out to people like you can earn well over a fulltime living from doing surveys on the platforms they refer you too.

Unfortunately this site is selling a lot of false hope, giving people the belief that they’ll be able to earn up to $500 for doing a single survey.

How Much Does My Survey Jobs Cost To Join?

It’s free to join the My Survey Jobs platform, and the survey sites they refer you too are also free to join.

However, not everything on this platform is about paid surveys. There is a paid upgrade option where they promise you’ll earn bigger money, but that’s to join some high ticket (mega expensive) scheme that’ll end up costing you thousands of dollars more before you’ve had a chance to earn any money with it.

Is My Survey Jobs a Scam Or Legit?

In my opinion it kind of is and it kind of isn’t. I mean, yes, some of the sites they send you to are legit and you can make a little bit of cash doing surveys, but you can no way make the kind of money they advertise, so that part is a scam and a con job.

Plus, they do send you to some other sites that are either known scams, or try to get you to pay nearly $35 to join a mega expensive training and affiliate platform. I say mega expensive because the platform will constantly try to upsell you on other products worth $1000s each.

The bottom line is I really don’t recommend you join My Survey Jobs.

By all means if you want to earn some coin doing paid surveys, then go ahead, but don’t bother joining through this platform. Just do a Google search and join each survey site directly.

My Survey Jobs only exists for the owner to earn affiliate commissions. While I’m fine with that aspect, I’m not okay with all the lies this person tells and the fact that they’re not upfront about what they’re doing.

This Is How I Make Passive and Residual Income Streams Online!

Okay, so My Survey Jobs didn’t end up being a viable way to make some money. Even if it was fully legit, paid surveys just don’t pay much money for your time anyway. If the goal is real money, then even real survey platforms are pretty much a waste of time.

There are some really great ways to make money on the internet, and my favourite is affiliate marketing.

For starters, it’s a really simplistic online business that anyone can do with a bit of training and perseverance. It’s also super cheap to get started and can be run on a shoestring budget.

My own affiliate marketing business brings in multiple streams of residual and passive income, the best kind of income. It truly gives you the lifestyle freedom that having both money and time can give you.

Whether you are looking for a part-time income you can earn from home in your spare time, or the dream is to retire from that day job, affiliate marketing is the way to go. There’s even the possibility of getting rich down the track, as there really are no limits on how much you can earn.

I’ve written a complimentary make money online guide to help people get started, so if you have a few minutes spare, click the banner below and have a read of it.

Inside the guide I explain just how affiliate marketing works, how you make money with it, just how simple the process is, as well as the many benefits of running an online business from home.

I also point you in the right direction with some training I recommend. I did this training myself and I know it works. Best of all, you can get started and join for FREE! No credit cards required.