American Online Jobs Review – This Is a FAKE Job Site!

We’ll get into the review shortly, but first I wanted to say well done for being here and reading this. You’re smart enough to do your homework before you join something, which is always the best thing to do.

Because of that you’ll probably never become the victim of a scam or totally waste your valuable time on something that sucks.

Price To Join: Free (but not really)

These days it seems like just about everybody is heading online to seek out new options for making money; whether it’s some extra cash as a side hustle, a fulltime income, or even way more than that. And why not? The internet has opened the doors to so many opportunities that are available 24/7/365.

I’ve been pulling in a fulltime income entirely from the internet for years now. Just about anyone can. It’s now become my goal to help others do the same and enjoy a lifestyle with way more freedom.

The very fact that the internet offers so many new options, and so many people are looking to cyberspace for those options, it’s also attracted all the world’s scammers. They scour the net, hoping to trap people in their dodgy make money schemes, so we always have to be careful online.

Diligence and dodging the scams comes through doing research first, and one of the best ways is to read product reviews just like this one. It’s the main reason I write so many reviews of make money online (MMO) schemes and training platforms. I’m here to help.

I came across American Online Jobs recently on social media and it sounded interesting, so I looked into it and this is what I found out.

So let’s now take a closer look at American Online Jobs and see if it’s hot or not.

What Is American Online Jobs About?

The very first thing I’ll say is that I have no idea who runs this or is behind the American Online Jobs website. They’ve made sure they remain anonymous, and that’s always a really bad sign.

So not a positive start for this one.

The sales pitch states that this “company” has some simple online jobs on offer that people can do in their own time from the comfort of home. Even the money sounds pretty good, with figures ranging between $700 and $1600 per week. 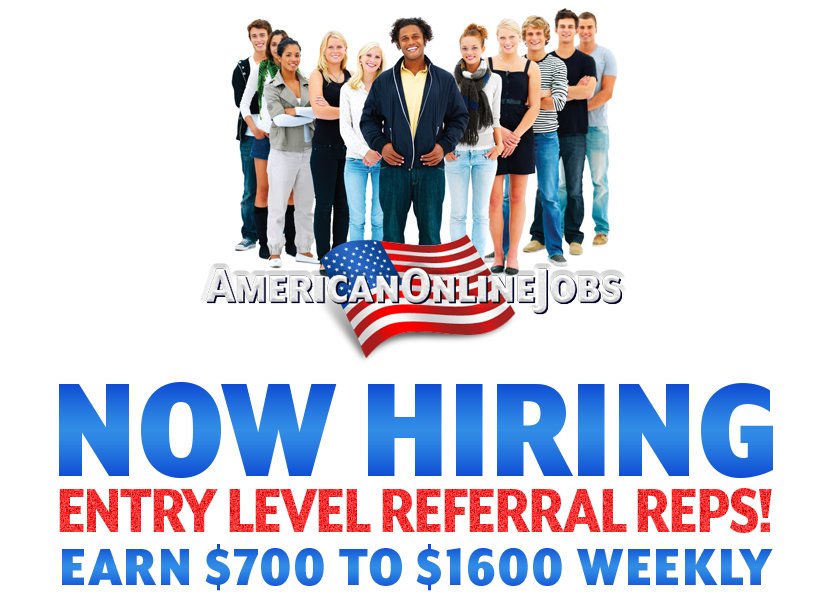 One of the first things visitors to the site are greeted with is a questionnaire. The options are multiple choice, and the idea of these questions is to determine if you qualify for a job with them or not.

Or so they say.

All you need is a computer and internet, then you can start to apply for the jobs this place has available on their platform.

After answering the initial questions, things start to get a little weird.

You get transferred to a paid survey site called “Toluna Surveys”. I used to be a member of Toluna and it’s a legit site, but strange that they’re sending people to a survey site. After Toluna you are told to join several other survey sites before you can move on to the next step in the process of “getting a job”.

Now that you’ve signed up for a number of survey platforms, you are then told to join a site called “Online Flex Job”. This is apparently where you’ll be applying for the available jobs, and we’ll get more into that in the next section.

I make a great passive income online and you can do it to. So avoid the scams and just do what I do. Click here for details.

So let’s first break down the process of what’s gone on so far, so we can see where we’re at:

The problem here is this: None of this leads anybody any closer to landing a well paying job from home.

Sure, you can do some paid surveys on the sites you were referred to, but they’ll only make you some coin at best. And why is a job site sending people off to join paid survey sites anyway?

Because the owner of the American Online Jobs website makes referral commissions every time someone they refer joins.

But anyway, there’s more to this than joining a couple of survey sites so the owner gets commissions.

Once you become a member of Online Flex Job, before you can start making money by performing simple tasks for Fortune 500 companies and the like, you are asked to purchase and install a particular brand of antivirus software.

They claim that the work you’ll be doing will be dealing with sensitive information, and the argument is they want all their workers to be operating in a protected environment, hence the antivirus software.

This is all BS and nothing more than a ploy to get people to purchase the software so, once again, the owner of American Online Jobs can earn an affiliate commission.

I’m an affiliate marketer and there’s nothing wrong with an affiliate wanting to make commissions, but it’s gotta be done in an honest, open and transparent fashion.

This person is tricking people into joining a bunch of stuff just so he or she can make money, but pretends there is some lucrative job offer at the end of it all when there isn’t.

I’ve Seen This Same Scam Before

I recently reviewed two other make money from home schemes that sound somewhat similar to this one, especially the first one on the list.

Anyway, basically all American Online Jobs and Online Flex Job are doing is trying to earn referral commissions on the survey platforms as well as the antivirus software.

There’s not really much else going on here, except for some training, which we’ll talk about in the next section.

Copy how I make $1000s in passive income online every month!

There are 8 lessons in the American Online Jobs Member’s Area. These lessons are designed to show you how to make money with AOJ.

Along with that there is also some training on getting people to join AOJ through Facebook for free. You can do this on your own profile, by creating a page, or on Facebook groups.

What you are learning to do here is refer others to the American Online Jobs platform by basically lying to them, so you can earn affiliate commissions when people join the survey sites and buy the unnecessary antivirus software.

The training here is pretty light on and doesn’t really teach you much except to lie to people about fake jobs and to spam social media.

This is really targeting jobseekers, particularly people who want to make money from home in a consistent fashion.

Unfortunately there are no jobs at the end of the sign up process, just a bunch of bait and switch tactics being used so the owner of American Online Jobs can earn affiliate commissions.

How Much Does American Online Jobs Cost To Join?

Technically there’s nothing to pay when you join American Online Jobs, the survey sites or Online Flex Job, except the $25-$40 for the antivirus software (which does nothing to help you land a job).

Who knows if this scheme might cost you in other ways down the track if you were to join it?

Is American Online Jobs a Scam Or Legit?

Even though there is a little bit of training, that you can potentially make a small amount of income, and the fact that you don’t have to pay a joining fee, I’m still going to label this a scam.

I say that because they lie through their teeth to lure people in with the promise of a high paying job from home.

Those jobs simply just don’t exist. The jobs are a total fabrication. Bait and switch is being used here several times, and I really don’t like the way this company plays.

No one is going to be making between $700 and $1600 a week with this crap. No way. And having to go out and buy the antivirus software so you can do a non-existent job is just a joke.

Give this a miss.

American Online Jobs proved to be yet another dud. There are lots of scams and things that are a complete waste of time online, but on the flipside there’s plenty of good and legit stuff as well. Those are just not sold as sounding too good to be true.

I do affiliate marketing online for a living and it’s been my number one income earner for some years now. Anyone can do what I do and make money if you follow some easy training.

I don’t even have to work fulltime hours to make the income I make, which is another huge bonus when you do this.

Let’s peek at some advantages of doing affiliate marketing:

Although a lot of people only do online marketing on the side for some extra dollars, I much prefer to have it as my fulltime income earner. It’s not just about the money, but the freedom lifestyle that goes along with it.

Let’s take a look at some of those benefits:

No matter what your goals are, affiliate marketing can make it happen.

If you click on the banner below this paragraph you’ll be taken through to my make money online guide. I made it to help my readers get started online.

As an affiliate, making money is a very basic process. I know not everybody understands how it works though, so I cover it in the guide.

Above I made 2 quick lists about advantages to working online, but inside the guide I expand on a few key areas so you can see what’s possible.

It’s good training that put me on the right path from the very beginning, and I recommend that same training to my readers. I know it works if followed. I offer a rundown of what’s on offer and you can even check it out for free, because there’s no cost to join as a Starter Member.

« Is O2 Worldwide a Scam or Awesome Business Opportunity? MUST READ! » What Is a Laptop Lifestyle and Is It Worth Living?